3D battles with the characters from One Piece 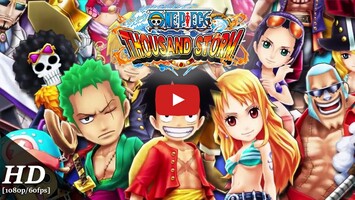 Advertisement
ONE PIECE THOUSAND STORM is an action game with touches of RPG where you play the characters from the popular anime One Piece. In this case, unlike what happens in the previous games, you can battle it out with glorious 3D graphics.

The combats in ONE PIECE THOUSAND STORM are really dynamic: your heroes always attack the nearest enemy automatically unless you select a different one. This can be a good strategy for defeating the strongest enemies first. To activate special abilities just press the corresponding buttons.

Between battles you can recruit new characters to join your group of heroes. Luffy, Zoro, Nami, Usopp ... there are dozens of anime characters. Plus before every battle you can accept help from other players' heroes to fight by your side.

ONE PIECE THOUSAND STORM is a game with a simple but fun combat system that comes with great graphics and an extensive story mode that anime fans are sure to love.
Reviewed by Andrés López Translated by Sarah
Advertisement

Why is this app published on Uptodown?
(More information)

Ohhh I really want this english version..but it said error: DO Nov 13th, 2017 The best Android games based on anime series Jul 20th, 2017 Celebrate the 20th birthday of One Piece with these games for Android

One Piece Treasure Cruise
Relive the adventures of Luffy and his crew in turn-based battles
Bleach Brave Souls
Official video game for Bleach the anime
JoJo's Bizarre Adventure Stardust Shooters
An amazing and epic action game
Yu-Gi-Oh! Duel Links
The most spectacular Yu-Gi-Oh! card duels
SWORD ART ONLINE: Memory Defrag
The official game for the popular manganime
Captain Tsubasa: Dream Team
Tactical soccer based on the popular anime
Fate/Grand Order
The world is ending and there's only one way to save us all
NARUTO X BORUTO NINJA VOLTAGE
Defend your village and compete against other Hokages online

Similar to One Piece Thousand Storm

Genshin Impact
An open-world RPG with spectacular graphics
Brawl Stars
3-on-3 battles from the creators of Clash Royale and Clash of Clans
League of Legends: Wild Rift
The MOBA king deploys its arsenal on Android
Cookie Run Kingdom
The sweetest kingdom is back

Sword and Magic
Explore a spectacular fantasy world
Naruto: Ultimate Storm
A beat' em up based on Naruto's adventures

WinZO Gold
India's biggest real cash game
Turn Poker
Think you can handle this high-stakes card game?
Fluvsies
Feed and entertain adorable creatures
Kelimelik
Put together strange words and you'll be a winner for sure
The Baby In Yellow
The same evil baby, now on your smartphone
Coloring and Learn
Draw, color, and have fun with this app
Mahjong Solitaire Free
The traditional and fun game of Mahjong
Macaron Doll